Who backstops the government? 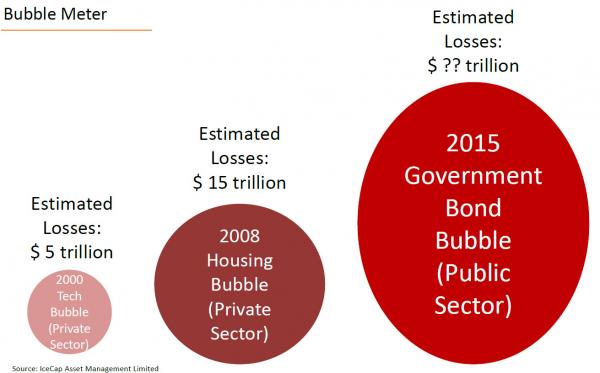 A client came in and we were talking about the bubbles we have experienced in the last 15 years and how we never dealt with them the right way. That is, to suck up the pain, heal and move ahead.

2000 tech bubble was painful, many 401k’s became 201k’s, but no one was losing their homes and the market crash affected relatively a modest percentage of the population. Around 20% or so.

The Greenspan answer was to lower rates to 2%, encourage home ownership via easing mortgage standards and Whalaa. Housing bubble 2008. The problem, now you had a bubble that was 3 times larger than first bubble it was trying to bandaid over and a far greater percentage of people were affected. Pretty much anyone who owned a home.

That being said, the pain of the 2008 crash was far worse and widespread.

The issues we are seeing around the world and here on our own soil is the Government Bubble is probably ten times worse than the Real Estate Bubble and Stock Market Bubble combined.

WHO WILL PAPER OVER THE GOVERNMENT BUBBLE WHEN IT EVENTUALLY POPS?